If you've been arrested or charged in Chicago with a misdemeanor DUI or a misdemeanor or petty traffic violation, your case will likely be heard in the Chicago traffic court. You need a Chicago DUI lawyer or traffic attorney familiar with the local rules, practices and procedures to help achieve the best possible results. That's Fagan, Fagan & Davis. 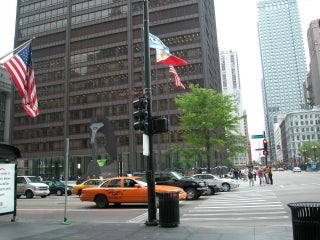 The Chicago traffic court is located at the Daley Center, 50 W. Washington, Chicago, Illinois, and is one of the Cook county municipal Court districts which hears a variety of cases arising from arrest or violations in Chicago, including:

If you face a DUI or traffic offense, you need an experienced Chicago DUI attorney or Chicago traffic lawyer. The prosecutor is an attorney, the Judge is an attorney, and the people who wrote the laws are attorneys. Don't be at a costly disadvantage.

You need a lawyer familiar with the court and these specific areas of the law to level the playing field and give you a fighting chance. Fagan, Fagan & Davis can do that for you.

Information about the Chicago traffic court at the Daley Center:

The site of the famous Picasso, as well as the famous Blues Brothers crash scene, the Daley Center is named for Chicago's iconic mayor, and hosts the Chicago traffic court and Chicago DUI court for misdemeanor DUI offenses.

DUI and misdemeanor offenses are heard on the fourth floor only. Traffic ticket violations are heard on the CL or concourse level, one floor down from the entrance level. Motions such as a motion to vacate a traffic conviction are heard on the LL or Lower Level the next floor down, which also houses the office of the Clerk of the Circuit Court of Cook county for this Court location.  Access to the traffic court and DUI court are available using elevators and escalators at the west end of the building, and security is significant, so plan on extra time to pass through.

An ATM is available on the CL level, as is a Starbuck's Coffee, and a property locker. Public bathrooms are available only once you've passed through security.

The Clerk of Court will accept payment by cash, check or charge, but there is a small convenience fee for using credit.

Public transportation is readily available, with the Blue Line stopping directly within the underground area directly adjacent to the Daley Center, the Red, Brown and Purple Lines across the street at the State of Illinois building, and buses running regularly that stop directly outside the Court.

There is no parking within the building, but there are multiple parking garages nearby.

Call Fagan, Fagan & Davis now to speak with a skilled attorney that can help to protect your rights now.